The online banter, the camaraderie, the bottomless font of knowledge and every now and again something which has you crying with laughter, all held together by a common love of things that float.

How often have you returned from a trip out on the water only to have someone say they were berthed next door when posting about your exploits on the YBW forum? Ships passing in the night and no-one knew.

Whilst we love to read the pearls of wisdom, revel in the storytelling prowess and generally chew the fat of life we don’t know each other to say hello should our paths cross when on our boats.

What we all need is a YBW forum burgee.

A great conversation piece, a chance to identify the boating elite or something to help you avoid the weirdos depending on your point of view. There isn’t a club to join or membership fees to pay. By posting on the forum or even just lurking you are already a member.

The exact origins of burgee remain shrouded in the mists of time. Some say the glass was fashioned on Marie Antoinette’s left breast, the debate as to which drink is being served has been argued by learned fellows for decades.

For many years it was assumed to be a Martini cocktail garnished with an olive, but in 1978 Professor Wendell Nelstrop of the Berkley academy conducted tests that cast doubt. He argued the olive was in fact a silverskin pickle and the drink a Gibson. Regardless of which tipple the spirit says pop over and say hello. I’ll gladly drink your boat dry to the bilges.

The mouse is more conclusive. In 1964 when forum member “boatone” designed the image he had an inkling that the internet would be invented and that it would be embraced as a social forum upon which to share ideas. At the time, the use of a mouse was both controversial and baffling. Fast forward several decades and that very same mouse has been adopted as the universal description of a device to control your screen cursor, a forward thinking genius.

Distribution of the burgee has gone through multiple evolutions. Forum member “hlb” initially organised production and distribution from his castle in the North West of England. Embroidery was undertaken by Benedictine monks and those original burgees have become prized works of art.

More recently forum member “prv” organised batch production of a second generation of burgees. The same logo was used but manufacture changed to an appliqué design.

In a daring night time raid “sarabande” from this parish managed to acquire an original design burgee from London’s Natural History Museum which was used as a template to re-commence production using the very same traditional embroidering techniques of the original. Each burgee was hand made using two individual embroidered panels to ensure onlookers can admire your exquisite threadwork regardless of port or starboard tack.

Matching piping was once again hand stitched in place to give the burgee a ceremonial, almost regal feel. State of the art testing was undertaken during the design phase – mostly using Big Dave’s Scania R480 truck on the M6 motorway.

Some time in 2014/5, forum member “HenryF” took on the task of retailing the aforesaid burgees along with a genuine wooden toggle to aid in the attachment of the burgee to a purchaser’s boat.

In 2016, “hlb” sadly passed away and we hope he will find agreeable cruising in the afterlife. Following this, long time forum member “petem” took on the challenge of commissioning and retailing a fresh batch of burgees. This new batch of burgess will again be embroidered on both sides from newly vectored artwork, based on the original iconic design. They are slightly smaller than the previous versions and now measure 45cm x 22cm however the graphic is slightly larger and bolder than the original.

These items are being sold on a “not for profit” basis. Any excess funds generated will be periodically given to a worthy marine charity or used to minimize the cost of future burgees.

Please note that YBW (“Yachting and Boating World”) are not involved in the design, production or sale of the burgee and do not endorse it in any way.

There are no reviews yet.

Only logged in customers who have purchased this product may leave a review. 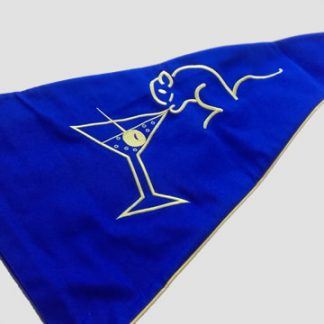